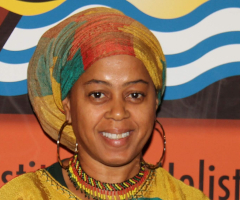 Nande A. Christie is a facilitator of self-healing, promoting life, health and ultimate wellness to for all. She is a proud mother of 5 children and 2 grandchildren.

She graduated in 2002 as a Certified Colon therapist at the Canadian Natural Health and Healing Centre in Toronto. In 2006 she received training as a Rape Crisis Counsellor and worked as such in a voluntary position at the Rape Crisis Centre of Peel. She has lectured at Health Symposiums in the U.S Virgin Islands and Florida, Atlanta churches, Toronto community centres and even in the houses of friends with crowds willing to give an ear. She is also a Living Foods/Vegan Culinary Specialist. Nande is a graduate of Centennial College's Complementary Care Program in 2009, earning Certificates in Reflexology, Aromatherapy, Therapeutic Touch and Cranial Sacral Therapy.

In 2011 she received a Certificate in Clinical Iridology in Professional Practice at the Institute of Holistic Nutrition (IHN). In the same year, she also received Certification as a Hot Stone Therapy Practitioner at the Stone Massage Company.

In 2018 Nande graduated with Honours at IHN and is a Certified Nutritional Practitioner, CNP. She holds firm to the knowledge that an ounce of prevention is worth a pound of cure!

Make your colon the happiest it has ever been and schedule an appointment with Nande for a colonic. Till then, have good digestive health!

To Book a colonic appointment with Nande Click here